A few years ago I wrote an article about a Spitfire, which crashed in Buurse a few days before World War II ended. At the same moment Han Brummelman was working on his book ‘Onder de vliegroute’, and later on this story ended up in his book. During the search for information about pilot Kester Jack Thomson, I got in touch with his daughter. She provided me with a lot of information and pictures about her father.

Pilot Kester Jack Thomson left on April 1st 1945 at 13.18 hrs from an airport in Heesch (Brabant, The Netherlands) for a fighter mission above occupied soil. He was part of the infamous 411 Squadron of the Royal Canadian Airforce. An hour later he got into an air battle with seven German fighters en was eventually shot down by Leutnant Hans-Joachim Luepke of the 1./JG1. (It was Luepke’s fifth allied airplane he shot down. In total he would shoot down seven planes). The Spitfire of Thomson (the RK180 DB-?) crashed around 14.15 hrs in a field at the Porikweg in Buurse. During the crash the plane broke in half.

29 year old Kester Jack managed to bail out his plane, but during the air battle he got seriously injured to his legs and face. He was captured by the German and was taken away to captivity on a stretcher. De last few weeks of the war he spend in a prison camp. After the war ended he returned to Canada.

The 411 Squadron, also called ‘Grizzly Bear’ had an impressive reputation. It was formed on the 16th of June 1941 at RAF Digby, Lincolnshire England, where at that time the Canadian 401 and 402 fighter units where stationed. With forming the 411 Sqd it became one of the best Canadadian fighter units. The pilotes of the 411th flew in several versions of the fameous Spitfire. 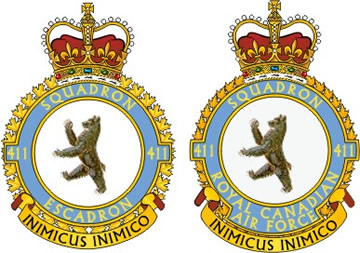 During the war they gained a tough reputation and being involved at almost all memorable fights during the war: ‘The Battle of Britain’, defending the Canal and North Sea, ‘Fortress Europe’, the battle of Dieppe , France, Germany. But also during D-Day, the battle of Arnhem and fights around the Rhine area the fighters of the 411 where active, destroying an impressive amount of enemy aircrafts, vehicles and other targets.

Kester Jack Thomson was born on September 3rd 1915 en grew up in Paris, Ontario in Canada. As a child he often spend his time at the shores of the ‘Grand River’. After his education he started working in the lumber industry and later also in construction. Already being crazy about planes during his childhood, he had no hesitation to enlist in the Royal Canadian Airforce when the war started. He became a pilot, probably flew Lancaster bombers first before he became a Spitfire pilot in the 411 ‘Grizzly Bear’ squadron. Shortly before he was sent to England, he married Margaret.

During his time as a POW he had to march in the so called ‘death marches’, a terrible walk from one camp to another. When the war ended, he returned to Canada where he immediately was hospitalised in the Sunnybrook hospital due to severe problems with his back. In this period he also got estranged from his wife, leading eventually tot a divorce in 1950.

After staying at the hospital for over a year he picked up his normal life again and returned to his old work he did before the war. Near the end of 1949 he meets Elva Pletsch at the Whitehorse restaurant in Paris (Canada) Elva was a waitress there and for Kester Jack this was the beginning of a new start for him. The couple got married in December 1953 and raised three children.

In 1971 he had a severe cerebral haemorrhage, which he never from recuperate; his left side was totally paralyzed. The last years of his live he started telling his children little bits about the war, but he never spoke a lot about his experiences. Kester Jack Thomson died, in the presence of his family, in 1988 at the age of 73.

This is the personal website of me, Erik Schaddelee. On this site I will post the things that I think are interesting to share with the world 🙂